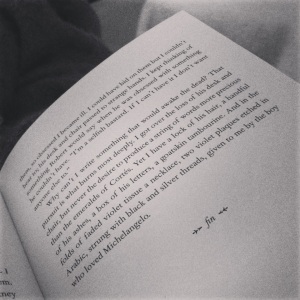 A couple of weeks ago, I was reading Patti Smith’s book, her account of the late 60’s and early 70’s in New York, and her lifelong friendship and creative partnership with Robert Mapplethorpe. I started reading it just before I went to New York but stopped reading it. Sometimes this happens when I’m reading non-fiction books – sometimes after the imaginary leaps of fiction it can be hard to get into biography or autobiography. The important thing is that I came back to it earlier this month and just couldn’t stop reading it. The beginning is heartbreaking – Patti becomes pregnant and has to give up her child for adoption. She decides to travel to New York in search of better things.

She ends up on the streets, homeless and lonely, with just a few encounters here and there with kind people. Eventually she meets Robert, also homeless, and they rely on the kindness of friends to keep a roof over their heads for a while whilst they find a way of supporting themselves. What takes off from there is basically a story of creative collaboration – with art, illustration, photography and poetry. It takes them from being homeless and sometimes starving, towards the Hotel Chelsea, where, even though they managed well enough with a roof over their heads, they were still often hungry.

There are a lot of layers in her story. She tells us about the eccentric characters in the Hotel Chelsea, which was at the time a hotbed of artists, writers and musicians, but she also shows us what it means to be in a partnership that transcends categorisation. Robert discovers that he is gay and after some initial sadness and distress, they move on and their relationship evolves, even in some ways becomes stronger. Yet they do part ways, once their careers take off in different directions (at least later on). Patti Smith, in contrast to Robert Mapplethorpe, seems to have a more anarchic and rebellious spirit, unable to enjoy the spoils of Robert’s career once he is invited to high class dinners and mingles with people she can’t relate to.

Yet they complement each other, and these things never seem to impact on their core devotion to each other and their art together. I think, when reading this book, I peered into a relationship that encapsulates the meaning of the word ‘soulmates’ – in which, for some indefinable reason, people often come into your life and change it irrevocably, whether it is personally or through being a teacher, or someone who takes your art, ideas and ideals somewhere different.

Patti Smith’s writing is beautiful – simple and truthful. Most people know her as Patti Smith the rock musician, but here you can see different facets – a poet, an artist, a lover, a fighter. At the end of the book, she adds a postscript, saying that the time felt right to tell their story, that Robert wanted her to write about their life together but she couldn’t find the right voice to write in. She’s done something incredible here, and I’m glad she did finally sit down to write their story. It’s one of the best biographies I’ve ever read. Both inspiring and moving.

We used to laugh at our small selves, saying that I was a bad girl trying to be good and that he was a good boy trying to be bad. Through the years these roles would reverse, then reverse again, until we came to accept our dual natures. We contained opposing principles, light and dark. ~ Patti Smith, Just Kids.