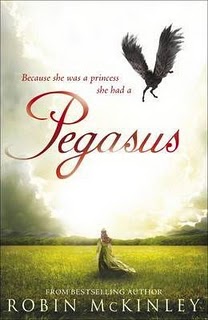 Yesterday, I stayed up til 2am in the morning to finish reading Pegasus, by Robin McKinley, who has become a firm favourite with me. She also wrote Sunshine, Beauty, Rose Daughter, Deerskin and Spindle’s End, amongst other books. She write stories and re-tells fairy tales in a way that does justice to them and also adds much more – fleshes out characters, brings them to life, makes them appear more real and also has a brilliant habit of turning them on their head – the female characters, for a start, are much stronger than you would expect in a fairy tale. Sunshine is among my favourite ever books, and if you haven’t read it yet, please do – it puts paid to that whole sparkly vampire thing!

Pegasus is a beautiful tale, that immersed me in its world full of humans and pegasi. As a condition of an age old treaty, some humans are bound to a Pegasus at the age of twelve, bound to become friends and allies. However, human and pegasi have a hard time understanding each other and communicate using signs that are often lost in translation, therefore they rely on ‘Speakers’ – magicians trained in the arts of translation between the two species. Princess Sylvi is bound at twelve to Ebon, and what happens changes their lives, and the lives of those around them. I found myself completely lost in this tale, so lost, that I felt sadder than usual when I ended the book. It is the first of a two part story, and the second part comes out next year.

Another thing I loved about this tale in particular was that as of yet, I don’t know any other supernatural books dealing with friendships between human and Pegasi, at least not on this level of involvement, where the story is about the Pegasi, rather than them being on the side. I felt that this book was something to savour, something different and unusual, even though the language is deceptively simple. I found myself wishing that there were more than two books, that it deserves a trilogy at the very least, but if someone as brilliant as Robin McKinley feels that two books is enough, then it will be.

All the characters are three dimensional, and though the villain does sometimes seem a little 2D, that is probably just because his villainy is clear-cut to Sylvi and Ebon. I loved the descriptions of flying and of the Pegasi lands, of the Caves and the tension of the constraints placed upon the interactions of Pegasi and humans in the human lands. This is the kind of book that will stay with you, will haunt you, or at least it will if you love it as much as I do! I don’t know what else to say about such a lovely book – except that it was magical and I just know that I’ll re-read it sometime.

There were a couple of things that niggled at me – like the excessive backstory in some places, and the long, meandering sentences, but I was determined to stick with it and I think the middle to end of the book is worth it. It might not be to everyone’s taste, it isn’t faced paced and action packed, though it does become more so towards the end, and it ends on a frustrating and sad cliffhanger, so I hope the sequel isn’t too long in coming. It is definitely a novel geared towards character development rather than plot twists.

The valley, now that she was in it, was bigger than it had looked from outside. A group of perhaps twenty pegasi stood in the flat centre of the valley, and with them stood a group of perhaps thirty humans. Sylvi saw the humans with a shock like a blow: how graceless they were, both squat and elongated-how ungrounded and unbalanced-with their strange thin pawing arms and huge clutching hands-and she forgot again that she had remembered how to be human, and she grieved that she was one of them. – Robin McKinley, Pegasus, pg. 279.