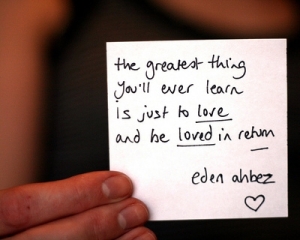 There are too many quotes to count that make a lot of sense in this inexplicable world. I guess the quotes I love change with my mood, but there are a few that I really identify with – some of them uttered by famous people and others by not so famous people; some from books and some from songs or movies. Quotes don’t just help me make sense of things when things are falling down everywhere, they also lift me up and give me inspiration when I’m at a low ebb. Like I am right now – I’m low and not really sure why I’m having a pity party – maybe it’s just the whole not having much money and trying to figure out a way to sort that out. I miss Quentin and though I love the girls very much, they’re so completely different to him and each other. Sometimes Georgina looks a little like him – the way she sniffs the air when we’re eating something she likes the smell of reminds me of Quentin sniffing the flowers. It doesn’t hurt so much now, it has gotten easier, and I know we did the very best for him. Mornings are hard because it’s only two cats begging for their breakfast and not a noisy boy with his insistent call. It’s strange but Georgina seems to be louder now – before her meow was very soft, if there at all (she had a silent/mimed meow – peculiar!).

Anyway – so, day 5 – one of my favourite quotes is a Shakespeare quote from the Tempest even though I haven’t actually been to see it on the stage:

We are such stuff as dreams are made on; and our little life is rounded with a sleep. ~ The Tempest, Act 4 Scene 1.

Like many things with Shakespeare, the most sweeping statements sometimes are the most truthful – we are all amazing and full of dreams, ideas and life – yet all life comes to an end. Its very final, and maybe a macabre thing to think about, but death is part of life and I think western society often chooses to hide death away as if it is something we mustn’t speak about.