Animal Lovers is a novel about relationship breakdowns, badger culls, and near death experiences, wrapped up with a little black comedy. I was drawn to reviewing this novel via Sandstone Press on Instagram because it seemed like an intriguing read – a novel with animal rights at its centre, or at least featuring heavily, looked as if it would appeal to me.

The novel opens detailing the beginning of the breakdown of Stuart and Marie’s 4-month marriage, in which Marie announces to Stuart that she is leaving him because she wants to go and ‘save the badgers’. He is distraught, and yet tries hard to understand her reasons for leaving, not quite believing that the relationship is completely over. He moves in with two friends, both bachelors, and one also recovering from a divorce, and hatches a plan to win back his estranged wife.

Both Stuart and Marie have some major flaws in that Stuart appears quite possessive of Marie, so I could see where she might feel stifled in the marriage, and yet her attitude also seems off-kilter, a little unreasonable and thoughtless, particularly given that Stuart is also recovering after and coming to terms with an illness affecting his brain.

Over the course of the novel, we learn more about the progress of their marriage, the way they view each other, about Stuart’s illness, and how Marie came to be involved in animal rights and activism. By the end of the novel, we can understand that both of them have their motivations and flaws that led to the breakdown of the marriage. They both have room for growth, to learn more about themselves and the world. In the short term, however, Stuart blames the badgers – and the cull – for taking Marie away from him. He tries hard not to be resentful or bitter, and for the most part manages this, which is part of the reason why you end up rooting for him.

The novel comes across as self-deprecating with a small measure of black humour. I found that I was often infuriated by the narrator’s (Stuart) actions and opinions, because he isn’t a particularly likeable character, even though we are rooting for him to come out on the other side having grown as a person and developed some self awareness (and emotional intelligence). Some of the other characters in the novel, particularly the characters in the anti-badger cull camp, came across as stereotypical – but this could be because we were seeing them through the lens of Stuart, whose goal is solely to win back Marie, and not to become more involved in saving the badgers (his attempts are half hearted at best). 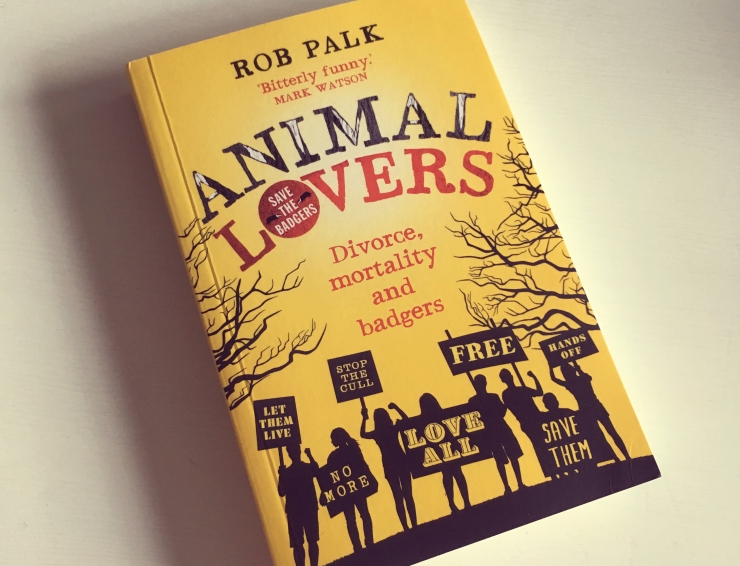 His judgements of activists of all stripes came across strongly, as people who are preachy and compensating for a perceived ‘lack’ in their lives. This is generally the view held of activists in wider society, in the media in particular – that activists are extreme and ‘unreasonable’. Needless to say, I didn’t sympathise with his views, even though the majority of activists he came across appeared to be exactly like that (this has not been my experience, even though there are a variety of people involved in activism of all kinds), when there was an opportunity for the writer to delve into the nuances of activism.

On a human level, this is a novel about people trying to find their way in life. Stuart is a writer, and often writers need to grow and experience life in order to write well, and by the end of the novel, this seems to be the case, despite the ending being messy and ambiguous. Marie had spent most of her life flitting from one thing to another and not quite finding her passion, her place, and animal activism certainly seemed to be that for her. She comes across as better than Stuart even with her own foibles and complexities, which often isn’t the norm in most novels about divorce and relationship breakdowns. It was also interesting to learn about Stuart’s illness, and I found the chapters about this part of his life some of the best in the novel.

Overall, Animal Lovers is a good read, entertaining, interesting, and full of humanity.