Chickenshed has a reputation for producing thought-provoking and politically relevant theatre. There is always a sense of their spring and dance theatre shows tackling subjects that are socially important, such as systemic racism (As The Mother of a Brown Boy, Crime of the Century), and globalisation and capitalism (Globaleyes). In this year’s spring show, Blowin’ in the Wind, they tackled political and social activism.

Mixing song, rap, dance, video projections, and a spoken commentary and narration by Jojo Morrall playing Rosa Parks (who famously refused to give up her seat to a white passenger), this was a love story to the global civil rights movement. What ties it together is the journey of Rosa Parks to see Martin Luther King speak in Washington. The show takes a look at various moments in history, both current and in the past, where activism, protests, and movements changed, and are attempting to change, oppressive social and political systems, occurrences, and societies.

These include the birth of the American Civil Rights Movement (with Martin Luther King), Argentina’s Mothers of the Disappeared, the ongoing Dakota Access Pipeline protests (No DAPL), the Berlin Wall, Miner’s strikes, child soldiers, and Black Lives Matter. As with many of Chickenshed’s performances, the cast numbered in the hundreds, with their children’s theatre, youth theatre, company cast, and BTEC students, showcasing their trademark diversity and inclusion.

The show was full of beautiful, affecting, and inspiring moments. I felt that the dancing for each section of the performance reflected the different themes and issues at stake, movement creating a visual representation. For example, the section about NoDAPL and Native Americans became a piece exploring the history of Native American oppression by white settlers, the controversy of Thanksgiving, and connecting the violence of the past to their current struggles and protests against the Dakota Access Pipeline. The dance focused on ‘Water is Life’, contrasting the basic need for water against the greed of the oil industry. Later on, this piece merged into a dance called ‘Only Human’, celebrating and reiterating the need to come together and protect the earth, culture, and the health of human beings. 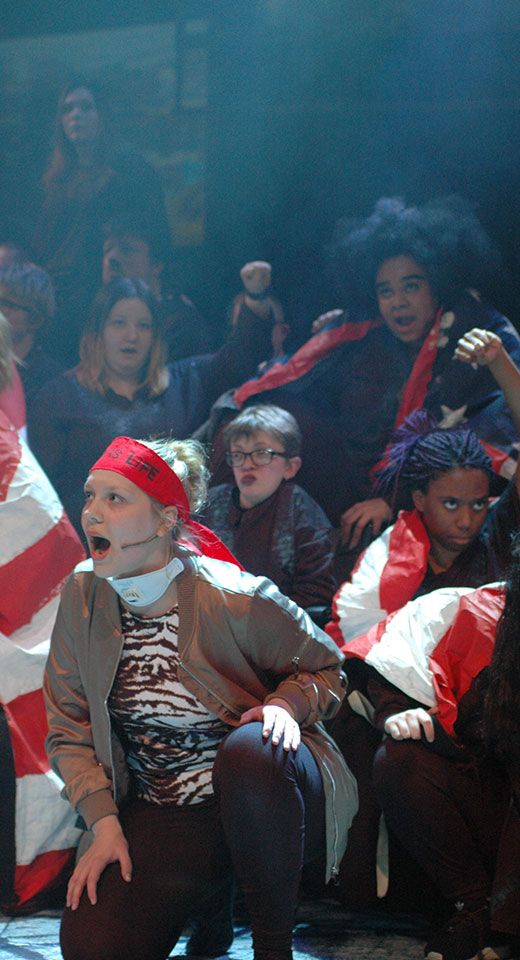 There were eerie echoes from the past reminding us of what is at stake in our current world, such as the Berlin Wall and how what happened could mirror what happens with the proposed Mexican border wall. The performances often depict ambiguities or the other side of a story, showing for example how some miners may have opposed the strikes, and why. Or how some activists fighting for black civil rights may be tempted to become militant like the Black Panthers. This was balanced by the mothers of young black men coming together to show that love and understanding is better than hate and violence.

The set design was ingenious, with a tilted bus set above the stage where Rosa Parks commented on and narrated the events taking place on stage. The movement, music, and dancing took centre stage, rather than ornate costumes or set design, so that the audience’s attention was focused on the details, such as the pieces of the American flag in the ‘Water is Life’ section. The music included protest songs such as the title song, Dylan’s Blowin’ in the Wind, What’s Going On by Marvin Gaye, Toy Soldiers by Martika, Come Together by the Beatles, and the gospel song Oh Happy Day. 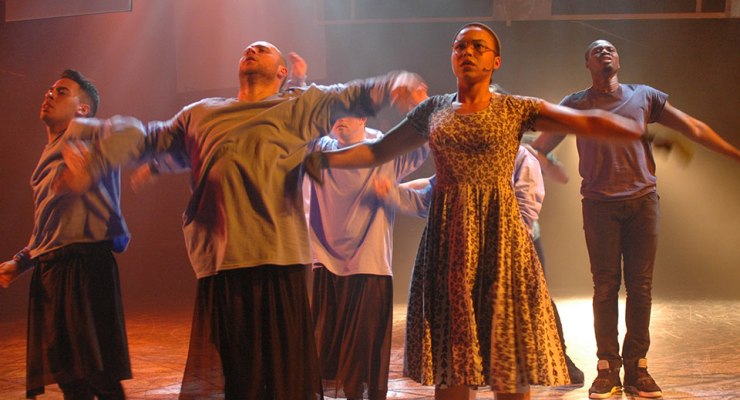 The takeaway from the production is an overarching sense of hope and possibility. In the times we live in, we need that sense of hope – the thought that it’s possible to fight oppressive systems and societies, to change minds and hearts, and that human beings can work together to make positive change. There was something hugely empowering in being reminded of the history of activism and civil rights movements, and how much has changed, even if we do have a long way to go. It was a strong reminder that hope, not hate, must be our state of mind, even in the darkest moments. The celebration of these movements, some ongoing, give us the power to imagine a better world, where oppression and injustice are a distant memory.

‘I’m just a humble, little sailor with too much to prove
But my boat’s so small and the ocean so huge
And I don’t wanna go half on a dream
So I need you to be a part of my team
I could never pretend or act like it’s just me
Without you where would I be?
Imagine…’ – Nico and Vinz, Imagine.

2 thoughts on “Chickenshed’s Blowin’ in the Wind”