The sixth film in our Project Ghibli series is Nausicaa of the Valley of the Wind, which, despite appearances, is not the first film released within Studio Ghibli itself (the first film from the actual studio comes next week, Laputa, Castle in the Sky). This is another of those before-Ghibli-Ghibli films created by Miyazaki and produced by Takahata in the years leading up to the formation of the studio, and marked the first time that the film score creator Joe Hisaishi worked with Miyazaki and Takahata on a full length feature film. Hisaishi would go on to work for Studio Ghibli, creating some of the most beautiful film scores in cinema history.

Nausicaa of the Valley of the Wind is what I would describe as a classic Miyazaki film: it has all the elements, from the preoccupation with environmental, social, and anti-war issues, to the strong, driven heroine, and characters that are complex, rather than fitting good/evil dichotomies. Whilst there is a clear distinction between good deeds and bad deeds, the reasons for those bad deeds may even be understandable, and it is clear that just like in our human world, humans are fallible and can change their minds, become more open to the possibility of other ways of solving problems.

The film, in a post-apocalyptic setting, is set after a 1,000 year long war and the Seven Days of Fire, when a host of warrior giants invaded the earth and destroyed modern civilisation. In the wake of their destruction, they created a vast Sea of Decay (a toxic jungle), swarming with giant insects and poisonous spores.

It follows the story of Nausicaa, a princess of the Valley people, who live largely unaffected by the jungle in a pocket of unspoiled land. They have learnt to harness the power of the wind to grow food and provide power, and live a humble but happy existence. Nausicaa is a curious, independent, and thoughtful young woman, intent on finding a way for the insects and humans to co-exist peacefully, and to understand the nature of the jungle in order to find a way to stop the spread of the toxicity. The first few scenes show her exploring the toxic jungle with breathing apparatus on, flying around with her glider, and we get a sense of what the world is like – outside the jungle there is desert as far as the eye can see, and few habitable dwellings, though later on we see a city in the desert. Most cities have already fallen in the face of the toxic spores from the jungle.

Nausicaa is fascinated by the large, armoured insects, the Ohmu, which look something like a cross between a giant woodlouse and beetle. The humans fear the Ohmu because their movements herald the coming of the toxic jungle, but Nausicaa has an almost mystical connection to them. In fact, there are some scenes that seem to use a kind of magic – the Ohmu seem to have glowing tendrils that act like telepathic communication attenae. The people of the Valley have a prophecy that someone will find a way to cure the Earth, and on a tapestry this person appears to be a man, but from the beginning we get a sense that Nausicaa has the potential to solve the crisis.

Nausicaa and her people are caught between two rivalling countries, the Tolmekians and the Pejite, when a Tolmekian warship crashes in the Valley. Unfortunately, this ship was carrying the embryo of a Warrior Giant, and the toxicity begins to spread across the valley. There was also a Pejite princess, Lastelle, on board, and she tells Nausicaa with her dying breath that they must burn the cargo in the ship (which they do, but this doesn’t destroy it). The Tolmekians, led by Princess Kushana and Officer Kurotowa, invade the valley, killing Nausicaa’s father, the King, and Nausicaa does what she needs to do to ensure that her people are safe, by surrendering.

Yet of course there is a plot twist and whilst Nausicaa is on board a Tolmekian battleship as a hostage, it is shot down by a young man, Asbel, who turns out to be the Pejite princess’s brother. Nausicaa and Asbel join forces when they crash land in the toxic jungle, and end up falling underneath it, where they discover a startling truth – that the jungle is hiding a secret, one that could solve everyone’s problems. Before this can happen, though, Nausicaa must stop the Tolmekians, the waking Warrior Giant, and the Pejite from going to war. 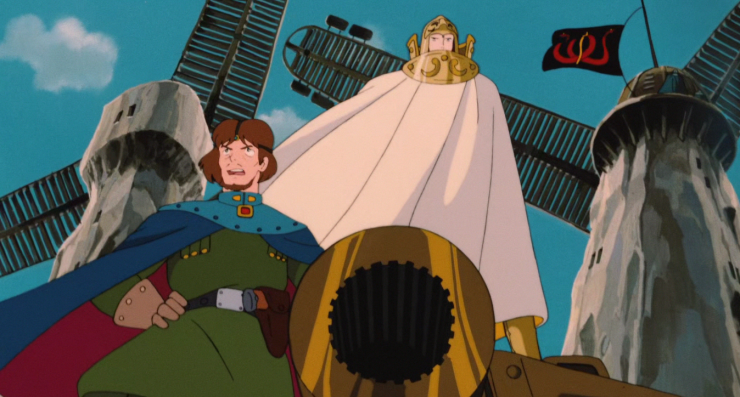 The story is complicated, and not at all what you would expect from an animated tale. If we’ve learnt anything from the previous Project Ghibli films, it’s that Japanese animation often tells complex stories, with interesting characters. You forget that Nausicaa is an animation – the visuals are stunning, the characters compelling, and the stakes are high. The story is driven forward by the decisions the characters make. The villain, Princess Kushana, whilst convinced that killing the insects will end all their problems, is also motivated by the fact that her arm was destroyed by one, and in certain places, she begins to seem almost sympathetic.

There are moments when we believe that she will change her mind, because she listens to Nausicaa and what she has to say, but by the end turns again and goes beyond the point of no return. We can see the struggle between keeping the peace, avoiding war and learning to co-exist peacefully with the environment, and people who are convinced that force, and war, are the only way to solve problems.

There are many layers to the story, and though I’ve watched Nausicaa a number of times before this viewing, I’m still amazed by how much more there is to understand; it’s almost impossible to wrap your head around the different layers with just one viewing. And yet – the story is fast-paced and at times you are left wanting to know more, which is a mark of good writing. This multi-layered approach to storytelling is what makes Miyazaki’s films so enduring – that, and his wonderful characters, beautiful animation, and ideas that stay with you long after the ending credits. 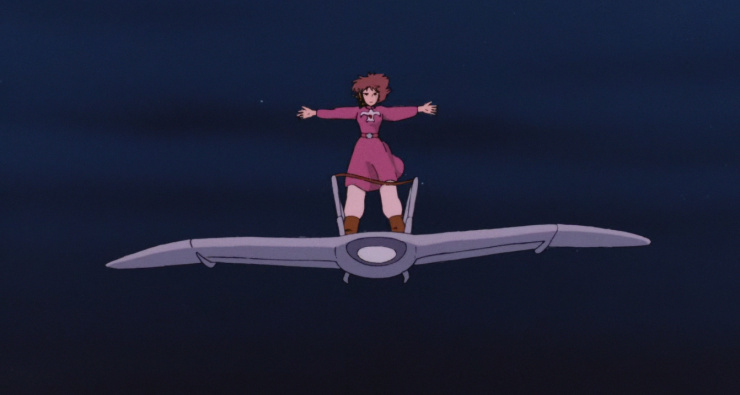 We can see signs of Studio Ghibli here, too, in the use of fantastical creatures, such as the little fox-squirrel that Nausicaa befriends, and the Ohmu, which remind me of a number of different things, notably Princess Mononoke. All the supporting characters are strong in their own right, and have intriguing back-stories and personality. Though it isn’t my favourite Miyazaki film, it is still amongst my favourite animated films.

Next week, we’ll be watching Laputa, Castle in the Sky – and yes, the first actual Studio Ghibli production!

You can read Dan’s post over at Stray Dog Strut.

3 thoughts on “Project Ghibli #6: Nausicaa of the Valley of the Wind”