The Castle of Cagliostro was the first time that Hayao Miyazaki had directed a full length feature film. It follows the adventures of gentleman thief Lupin III, a follow on from the popular anime series of the same name. In comparison with Panda! Go Panda!, The Castle of Cagliostro is not aimed at children, as it has some adult themes, though there is no swearing or adult content like in the series, which would explain its Parental Guidance rating. 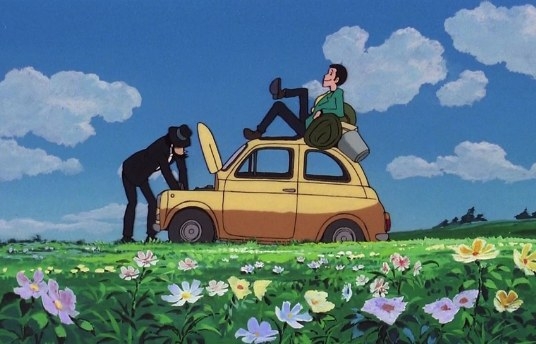 The film follows Master thief Arsène Lupin III as he robs a casino with his accomplice and friend, Daisuke Jigen, and escapes with the money in a flurry of sound, sirens, and a madcap car chase in a Fiat 500. When Lupin looks at the money properly, he discovers that they are high quality counterfeit bills, of all types of currency, produced by a famed wellspring of counterfeiting, the duchy of Cagliostro. He throws all the money out of the car, and decides that they’ll take a trip to Cagliostro to discover the truth about the counterfeiting operation (and probably to steal the secrets too). 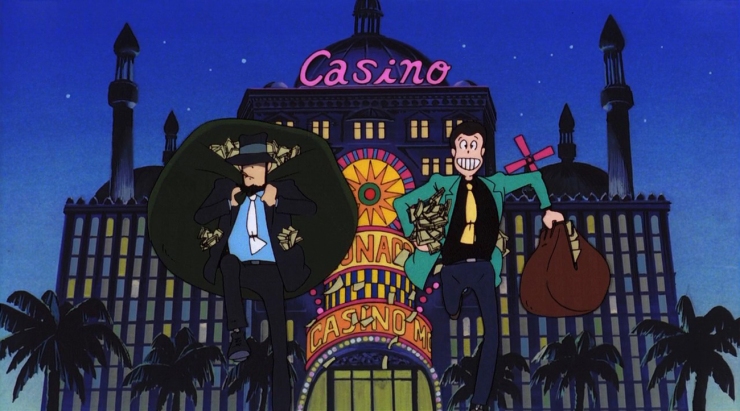 On the way, they encounter a princess of Cagliostro, Clarisse, who is due to be married to the evil, greedy Count of Cagliostro, and Lupin takes it upon himself to rescue her. Lupin enlists Jigen and another associate, an anachronistic ninja assassin, Goemon, and sends his calling card to the castle to get his nemesis, Inspector Zenigata, to come and investigate (and provide an unwitting diversion). After the two nemeses become accidentally trapped in the dungeon under the castle, Lupin and Zenigata team up to escape and disrupt the Count’s counterfeit operation and save Clarisse from the forced marriage.

The series, film and character are based on the fictional character Arsène Lupin by Maurice Le Blanc, who wrote a series of books about a gentleman outlaw. Arsène Lupin III is purported to be the grandson of this character, and first appeared in a series of Manga by Monkey Punch. This Lupin announces his intentions to steal things by sending a calling card, which is what he did in The Castle of Cagliostro. This is the way that Inspector Zenigata knows that the situation is genuine, even when the Count tells him that they don’t need his help, and that Lupin has been dealt with (he’d rather rely on his murderous thugs). The popularity of the Manga novels led to a TV series being made, which is how Miyazaki became involved, though he arrived on the project midway, along with Takahata. They continued to work on the series until it ended (and improved it).

The film departed from the Lupin portrayed in the series, where he was a scheming and lecherous thief, apathetic (a sense of ennui), and prone to vulgarity and swearing. Miyazaki has described the change in the movie as Lupin growing up, becoming more thoughtful, and growing as a character, though in the film he is also a happy-go-lucky, upbeat and positive character, a stark contrast to the apathetic Lupin in the series. However, by the end of the series, Miyazaki and Takahata had tried to work changes into Lupin, making him a much lighter character.

‘I’m not sure where the request came from, but we were compelled from somewhere in the organisation to make changes in the direction of the old Lupin series. We (Takahata and I) were in a fix, having taken over direction midstream, and wanting more than anything else to get rid of this sense of apathy that infused the story. We weren’t ordered to do so. However, even though apathy was a cutting-edge trend at the time, the high energy of mini-car races belonged to us. Lupin would be happy-go-lucky, upbeat, and the son of a poor man. All his grandfather’s riches had been squandered, nothing was left. Lupin would run around in circles, always escaping, and always pursued by the drone-beetle-like Inspector Zenigata. He would have a Walther P38 that had been mass produced by the millions and he wouldn’t make a big deal about it. He would rely solely on his wits and his physical abilities, and relentlessly pursue his goals. Jigen would be a friendly, cheery fellow, Goemon would be an anachronism and funny, and Fujiko wouldn’t advertise her cheap eroticism.’ – Hayao Miyazaki, Starting Point, ‘Lupin Was Truly a Creature of His Era.’

The change of Lupin’s character can also be seen in his choice of car – the bright yellow Fiat 500, in contrast to the series where he drives expensive cars for dubious reasons (notably a Mercedes-Benz SSK, because it was ‘Hitler’s favourite’), and to show off his wealth. Miyazaki wanted to remove this sense of apathy from the story, to create a better sense of what he considered a ‘hero’.

The film itself opens with a breathless, adrenaline packed sense of movement – from the casino robbery to a number of different car chases throughout the film, and a sense of adventurous peril that continues right to the end. There are many humorous sequences, and Lupin himself likes to joke and fool around. He has the sense that everything will turn out well, even when everything seems to be going wrong.

There is everything that you’d expect from a film that follows a good-hearted gentleman thief and his cronies – a plan, stealth, dungeons, challenging the Count and his thugs, a moment where you are sure everything is lost, and a great comeback (that involved gatecrashing the wedding). The characters themselves don’t have as much depth as in some Miyazaki films – the supporting characters are almost archetypal, with the evil, dark, greedy Count, the prickly ex-girlfriend thief and spy, Fujiko, who happens to end up helping Lupin escape with his life, and even Inspector Zenigata, with his fifties style hat and camel-coloured mac.

There are some interesting plot twists and in parts there seems to be something deeper to the story that is hidden just out of sight, such as the fact that the international court won’t allow Inspector Zenigata to investigate the Count or his castle for the counterfeiting operation. Even when offered irrefutable proof, they vote him down, afraid of disturbing international relations and politics.

The Count appears to be involved in a number of dark operations (only alluded to), even more obvious when he wears a sinister outfit to his wedding, which covers half his face, and has small horns at the temple from a goat headdress (the symbol of Cagliostro). The wedding procession includes creepy priests dressed in black robes and tall hats, long shadows, and a candle-lit, flickering church. The Castle itself is gothic, dark, and richly furnished, infusing the proceedings with further sinister atmosphere. 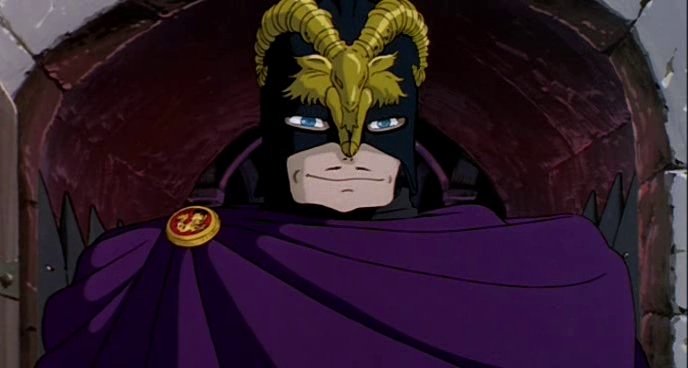 The scene animation and backdrops are beautiful and detailed, and we can see Miyazaki’s style developing. He uses environment, movement, and colour to express the personality of characters, which is true of his later works too. What I liked the most about this film was the sense of momentum, pacing, and the car chases. I didn’t enjoy the characters as much, especially compared to later Miyazaki films. 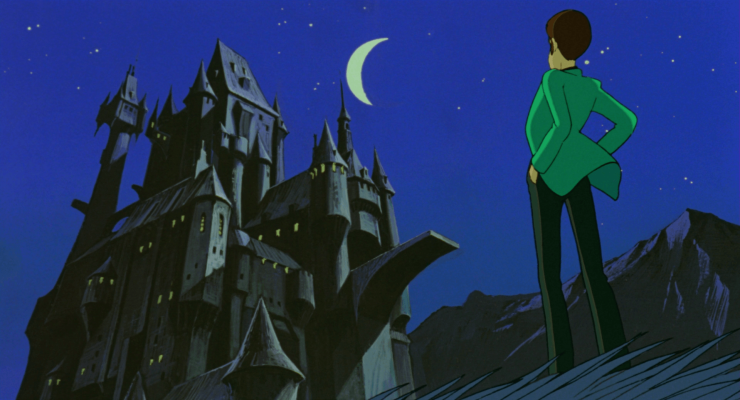 As Miyazaki himself has noted, Lupin truly is a creature of his era, and the film, whilst still fun to watch, is a little dated. It was interesting to watch a Miyazaki film that is a straight-up action adventure film, with little to no fantastical, supernatural, or magic elements. In the end, it is a story of how Lupin, after all his thievery, has little left to do except steal the hearts of young women. As a result, the gender roles here are also old fashioned and heterosexual (Lupin saves the girl), though Fujiko seems more independent minded, taking her own initiative.

‘What could a fictional character like Lupin, who had been overtaken by the real world, possibly do? The only thing left for him was probably to try to steal the hearts of young girls…’ (Miyazaki, Starting Point).

Next week, we’ll be watching Chie the Brat, directed by Isao Takahata. Dan’s post and thoughts can be found at Stray Dog Strut.

‘I often think of Lupin fondly, for he was hungry in those days; he was a bit lecherous, fastidious, scattered, and headstrong, and he was crazy about mini-car races.’ (Miyazaki, Lupin Was Truly a Creature of His Era).