Panda! Go Panda! was Miyazaki and Takahata’s second feature-length collaboration, though this was still a number of years before the formation of Studio Ghibli.

It was released in 1973, through A Productions and Tokyo Movie, with Miyazaki and Takahata’s fellow animator and mentor, Yasuo Otsuka.

Panda! Go Panda!, and Panda! Go Panda! and The Rainy Day Circus are both around 30 minutes long, shorts that were originally shown before a Godzilla film.

‘When the film was released, I went to the movie theatre with my son and niece. It was shown with a Godzilla movie and it wasn’t very long. But the children who came to watch it enjoyed it immensely. At the end they sang along with the theme song. I was thrilled. I recall feeling very happy at the sight of those children. And I think it was because of the support of those children that I decided on the kind of work I’d do from then on.’ – Hayao Miyazaki, in Starting Point, Panda! Go Panda! Creator’s Message, 1991.

The films were released at the height of a panda craze sweeping Japan – the government had announced the loan of a pair of giant pandas to Ueno Zoo from China, as part of panda diplomacy. Ueno Zoo was controversial for its dark history of animal slaughter during the Second World War – the history is gruesome and upsetting, though during the 1970s the animals were treated far better.

I have a love-hate relationship with zoos – I understand that some of them, London Zoo in particular, are famed for their conservation, education, and breeding programs, yet there is always something sad about any creature being in a cage or exhibit. Particularly if they are creatures that would naturally have a large territory, and would thrive in the wild. Although this is perhaps a romantic daydream considering that humans have encroached upon habitats and there are so many wild animals that have been hunted to the point of extinction by poachers (not to mention the effects of climate change). It could be that some well-kept, caring zoos have become a way to look after the legacy of the planet. 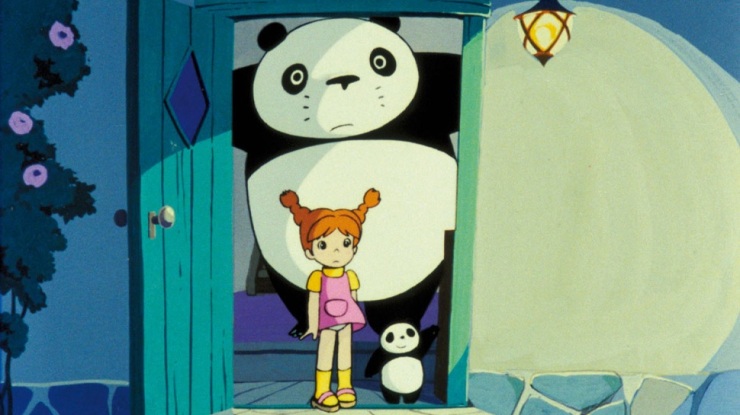 Panda! Go Panda! follows the adventures of Mimiko, a little girl whose Grandmother has gone away on holiday, leaving her to look after the house and herself. One evening, she discovers a little baby Panda, Panny, who has found his way to the bamboo grove just outside the house.

She takes him indoors, and is visited a little while later by Papa Panda, a large, beatific panda, who is grateful that Mimi has found Panny. Mimi observes that Panny has no mother, and offers to be his Mama, if Papa Panda will be her father too. A little bit of a complicated family relationship, but extremely cute.

The film follows their adventures – Panny causes chaos in Mimi’s school kitchen, and it turns out that Papa Panda and Panny are zoo escapees – the zoo keeper turns up looking for them. They agree to return to the zoo, but only as day-inmates – at the end there is a funny sequence where Papa Panda dons his hat, clocks out, and gets the train home to Mimiko.

Panda! Go Panda! and The Rainy Day Circus follows them once again as Panny discovers a baby tiger, Tiny, hiding in his bed. This first sequence reminded me of the story Goldilocks and the Three Bears, where the little bear (Panny) discovers that someone has eaten his food, and is sleeping in his bed. Mimiko, Papa Panda, and Panny take him in for the night, and the following day, Mimi asks around town whether anyone knows if a tiger is on the loose.

Whilst she is asking around, Tiny and Panny go missing, and Mimiko discovers that a circus is in town, where Panny and Tiny are once again causing chaos. Panny ends up in the mother tiger’s cage, and she escapes with him in her teeth, presumably to find her own cub. Brave Mimiko gives Tiny back to his mother, and Panny is returned to her.

The circus ringmaster is so grateful that he gives Mimi, Panny, and Papa Panda some tickets for the following day – but disaster strikes as a torrential downpour floods the whole area. Papa Panda, Panny, and Mimi go off to rescue the circus animals, who are stuck on their train whilst the humans are safe in the town. The film ends, once again, with everyone safe and enjoying a day at the circus.

Both films are clearly aimed at a young audience, with easy to follow storylines, conventional gender roles, and happy endings. There is a major sense of fun, cuteness, and energy running through them, and though they are aimed at children, there is a lot to love about the style of the animation, and the escapades that the characters get up to.

There are hints of later Miyazaki films – Papa Panda is a dead ringer for Totoro, with his bellows, roundness, height, and slow, easy way of approaching life. Mimiko reminds me of the little boy in Howl’s Moving Castle (Markl), and of Mei in My Neighbour Totoro, though she has more of a physical resemblance to Pippi Longstocking, a shelved project that Miyazaki and Takahata were working on (they couldn’t gain filming rights to the story).

‘By the way, Panda is a very big-hearted, easy-going character. He makes those around him happy just by being there, without doing anything in particular. In that respect Totoro and Panda are similar for me.’ – Hayao Miyazaki, Starting Point, Panda! Go Panda! Creator’s Message, 1991.

As with later Miyazaki films, however, there is some preoccupation with nature and animals. The contrast between the restrictive environment of the zoo and circus, and the freedom and joy that Panny and Papa Panda feel being so close to a wonderful bamboo grove, shows that Miyazaki and Takahata were concerned about what was natural and right for animals.

Papa Panda constantly makes reference to the bamboo grove, as if he can’t believe that such an amazing place exists. The beautiful shots of scenery – with rice paddy fields, trees, forests, and hills (inspired by Miyazaki’s childhood) – give a real sense of openness and space. In many of Miyazaki’s later films, there is always some greenery or environmental theme, and we can see this developing in these two films. Miyazaki and Takahata both love animals, and this comes across in their attention to detail in bringing the animals alive – both in these films and in later features.

Both films are wonderfully cute and fun, and though not complex enough for an adult audience, I still enjoyed watching them. They are full of joy and celebration – uplifting and positive. Though the gender roles were old-fashioned and reflect the norm of the nuclear family, I felt that Mimiko, with her can-do attitude and courage, was a strong role-model for children. I would recommend it for a happy hour of fun for the kids – especially now that the summer holidays are underway!

My husband Dan has written his thoughts and in-depth review of the film at Stray Dog Strut. We’ll be discussing The Castle of Cagliostro next, a feature length version of Lupin the Third, a popular anime series that both Miyazaki and Takahata worked on.