Another week has slipped by, quite a busy one, so at least I have some kind of excuse for not blogging properly this week. On Thursday, my parents, sister, and I were in Stratford-Upon-Avon, Shakespeare’s birthplace and resting place. 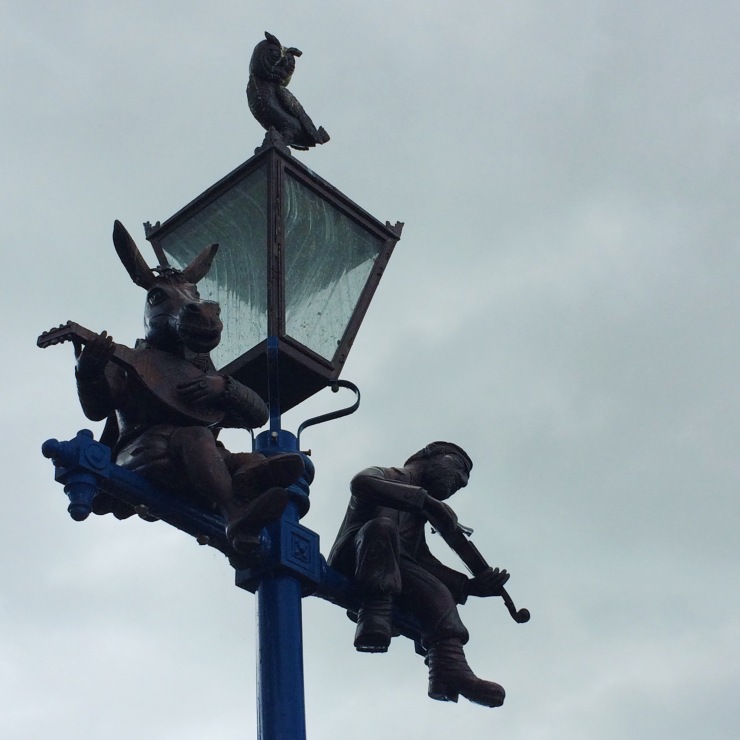 My Mum has been a theatre captioner for a number of years, freelancing for Stagetext, and now the RSC (Royal Shakespeare Company), so on Thursday afternoon she was captioning A Midsummer Night’s Dream at the Royal Shakespeare Theatre, and my Dad, sister, and I all went along to watch (my husband Dan is dog-sitting for his parents this weekend!). I’ve seen A Midsummer Night’s Dream in a few different formats over the years – notably Chickenshed’s version which is always beautiful – and this one was stunning. Puck was played fantastically by a woman, and the Mechanicals were hilarious. Oberon and Titania were mesmerising, and the set design was enchanting – so many superlatives, but deserving of every one.

I should give a little bit more information about captioning for the deaf and hard of hearing. My Mum began her work as a captioner for Chickenshed, and still works as their in-house captioner. Over the years I’ve appreciated the work that goes into captioning by observing her process. Captioning isn’t the same as subtitling, because the captioner has to be there during the performance to time each line onto the captioning box (using special software and a computer).

They have to see the play at least once or twice to check the script, format it into lines for the box (and check spellings, names, and so on), make sure the timings are right, and also write in sound, accent, and musical descriptions, such as [Wind Blows], [Cymbals Crash], or [He Whispers]. Then the captioner sits in a spare seating box or up with the sound and lighting engineers during the performance and presses the return button for every line that goes up on the box to ensure correct timing. I’ve been lucky enough to experience many different plays through my Mum’s work across the UK – recently she’s captioned Matilda in the West End, and Les Miserablés, which she was so excited about!

This was my second visit to Stratford-Upon-Avon this year – the first time was just for an evening whilst my Mum saw the play for her script checking, so I didn’t see much of the city (though I spent a nice evening in the theatre’s café reading!). This time, we stayed overnight, so experienced some of what the city has to offer. We spent a lovely hour in Fourteas, the 1940s tearoom on Sheep Street – where we had tea and cake in the courtyard at the back. The waitresses are dressed in 1940s clothing, and the menus look like ration books.

There’s bunting everywhere, posters, and old signage (like the Bird’s Custard tin sign in the courtyard that proclaimed that you can tell that it’s real Bird’s Custard by it’s smooth, creamy texture – I don’t want to think about what must have been put in fake custard). I had a delicious Rose tea, black tea with rose petals, and my favourite – carrot cake – which was perfect. The waitress brought a tea-timer, a little hourglass which told us when to take the steeper out of the pots, something I haven’t seen before!

My Dad wanted to go for a boat trip down the River Avon, so we hopped on one of the many tourist boats, and took a leisurely trip past the church where Shakespeare is buried (and may have been married – this is anecdotal), and in the other direction, in part of the wildlife sanctuary. There are swans everywhere in Stratford-Upon-Avon – flocks of them. At the moment, there are also a lot of Canadian Geese. They all tend to be a bit dangerous if approached though! I spotted two very cute fluffy grey swan ducklings – definitely not ugly ducklings at all. The parents were kind enough not to attack me whilst I took a couple of photos.

After our boat trip we went for a walk along the river to the church where Shakespeare is buried, the Holy Trinity Church. His family are also buried next to him – his wife Anne Hathaway, his daughter Susanna Hall, John Hall, her husband, and Thomas Nash, the first husband of Shakespeare’s grand-daughter Elizabeth Hall. They all have their tomb-stones and remains buried at the foot of the chancel steps, which is the most prominent position for remains buried in a church. It’s always quite strange to come to terms with being so close to the remains of historical figures, but at the same time, it also gives you space to reflect on what they have left behind for us. 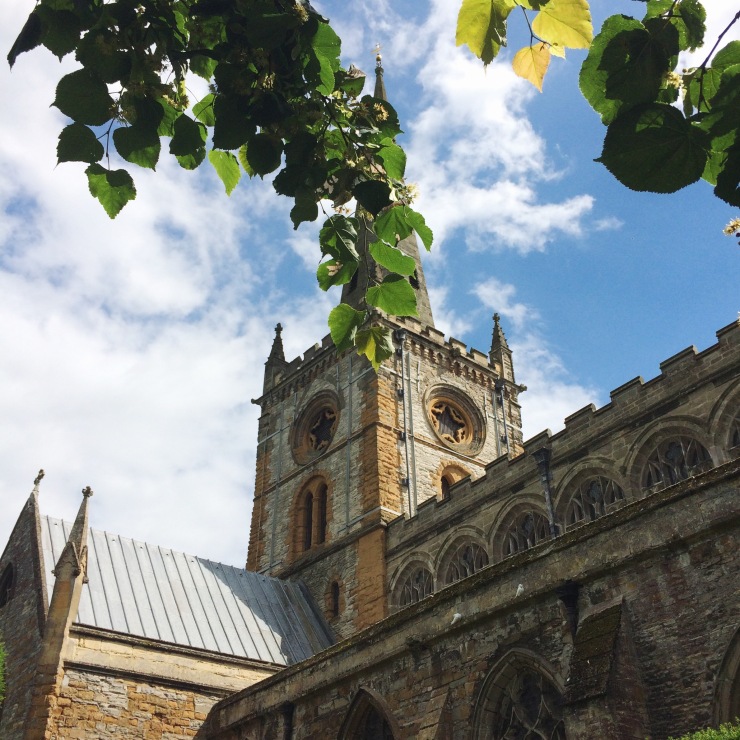 In our walk back along the river into town, my sister spotted a small stone monument under a tree for Vivien Leigh, the star of Gone With The Wind, who also performed extensively in Shakespearean plays (she played many of the leading ladies – Ophelia, Lady Macbeth, Cleopatra, and Juliet). There is a little yellow flower growing just behind it. There were also a number of other stone monuments along the bank. 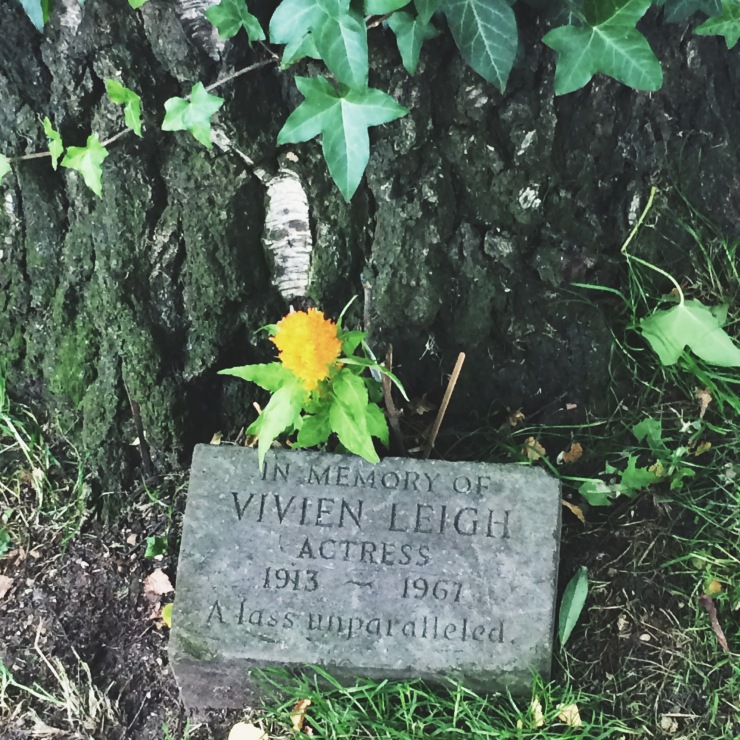 We ended the afternoon eating fish and chips outside, with a view of the river, yarn-bombed trees (in aid of Goodwill and Growth for Africa, Remembering Trees), and two singers setting up camp and attracting a crowd in the area outside the theatre. It truly is a wonderful town to explore, especially if you like Shakespeare, and literature in general. I also recommend a visit to The Dirty Duck, where we ended the evening on Thursday – it’s where the cast of the shows have a nightcap before turning in!

This weekend I’ve been taking it easy, for the most part. I’ve started reading The Wander Society by Keri Smith, where she documents her discovery of a mysterious, exciting movement, which she stumbled upon in a used bookstore. The Wander Society is a movement for those who are disillusioned with the existing political systems, overwhelmed by the pressures of modern life, and are seeing the rise of a technology-laden existence:

‘The Wander Society is a backlash, a reclaiming of the power of the individual in a world where choices and freedoms are limited, and almost all of daily life has been commercialised.’

It seems to me like it has much in common with the Romantic movement, and is something that I’m looking forward to exploring. It feels as though this book has come along at the right time in my life, when I need something different and empowering. The exercises, manifesto, and ideas contained within are exciting and inspiring. 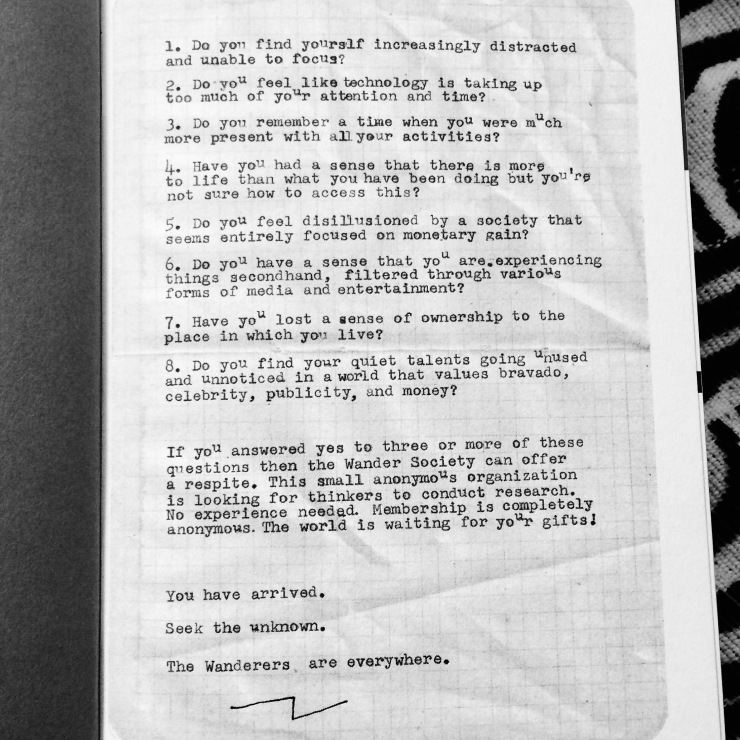 My current fiction read is In The Afterlight by Alexandra Bracken, the final book in the Darkest Minds trilogy. I’m still slogging my way through The Road Less Travelled, which, whilst some of the ideas and tools are relevant and still contemporary, some of the ideas are outdated and even a little prejudiced (in terms of gender roles and sexuality, particularly towards LGBT people).

However, it’s still a groundbreaking work on psychology, which is helping me to clarify and understand some aspects of my own relationships, emotions, and understanding of the world. My reading of the book is slow because there are so many things to take in and understand. Sometimes you need time with a book, although I think I’ll be happy when I’m finished with it.

If you’ve found your way through this monster of a post, congratulations – have a cup of tea and biscuit (or coffee and cake, whatever floats your boat). Normal blogging service will be resumed next week.

‘I’ll call for pen and ink and write my mind.’ – William Shakespeare.