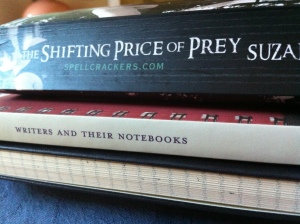 So, its been a week – and I have a good excuse, promise! I’ve been struck down with a nasty cold and on Thursday, I started NaNoWriMo for the second time. So I’ve just lacked general energy between the cold and monster episodes of writing. I’m writing this blog post because I’m having a slight crisis. It isn’t that I don’t have a story – it isn’t that I haven’t written anything. It’s more that this second time of National Abandon Your Sanity month, I feel less motivated than last year.

Last year, it was all new and exciting. I felt a surge of energy and I wrote 9,000 words plus in the first three days. This time, it is much slower. Part of me thinks its because of my cold – I’m lethargic, sneezy and irritated by the itchy feeling in my ears. Part of it is because this is unknown territory – last year I had a pretty good plan and idea about where the story was going, even if I did take off in a different direction halfway through. I feel like this time, I feel less encouraged. My family were excited too – they were with me as I complained about my aching fingers and my irrational urge to sleep. They asked me if I’d done my word count for today, and when I said ‘not quite’ – they gave me a kick in the butt. This year, I think maybe they’re less excited. Possibly because I haven’t quite finished the last novel I wrote last year. Its always going to be like that though – writing isn’t romantic or like writing an essay that can be finished in a few weeks. It takes time and dedication, and hard work.

Granted, its taken me a long time to pick myself up and get moving again with writing fiction. This year has been tough. Fighting depression and pulling myself out of a rut, building things up bit by bit – that didn’t leave as much energy as I would have liked for writing fiction. Blogging and journalism has mainly been my saving grace. At the same time, I love writing fiction. It is, maybe, much harder and more painful than writing non-fiction (not to say that that isn’t painful too).

Getting your imagination to take flight and commit to writing words down, to lock up your inner critic and get the first draft done – that takes major guts. NaNoWriMo is special because you have a whole community of people doing the same thing, churning out their word count each day, pushing themselves to the limit. You have people you can talk to, or ask questions in the forums. It doesn’t matter that what you’re writing isn’t fantastic, because you’re getting the skeleton of the story down. You’re beginning to build something. Each word, each sentence, leads towards the ending.

It might be that I’m having to conquer the fear again. I’ve written about it before – the fear that your writing isn’t going to be good enough/that you might get something wrong/that you’re bored and can’t be bothered. Its all the same thing. I find it good when I get into the flow of writing and don’t feel so bored or afraid anymore.  Its like a trance that takes over and your fingers are flying over the keys. Its a place that has no room for the inner critic. It’s just you, and your imagination and the keyboard and the page. Its a place that all writers and artists want to get to.

Except in the beginning you’re pushing against yourself and that is often off-putting. It discourages you. Sure, for NaNoWriMo, you’re meant to leave the inner critic behind. The inner critic, however, is not just about editing. Its also those niggling feelings that make you doubt that you can get these words down, that something’s not working, or that you’re bored/tired/have other things to do. No. You don’t have other things to do because you’ve committed yourself to a month of writing 50,000 words. Its something that you have to do, that will ultimately enrich you, will pass over into other projects you do. You’ll feel better about yourself for writing so much.

The editing and sifting through the rubbish to get the gems comes later. No matter how much I tell myself this, it still feels different this time. I’m still writing though – and willing myself to get through it. I think after the second week it will start to feel better and more vital. I’m out of practice with fiction writing and this is what I need to push through it. Its also about enjoying every moment, even when things get difficult and dark in your story. When every word feels like you’re swimming against the stream. My problem is that I need to find a way to turn off the distractions, to leave FB and Twitter alone until after I’ve finished my words for the day. Immersing yourself into the world of your novel is important, and that might be what I’m lacking here. There was more time to think about the world of my novel last time. This time, its the same world and character, but a new story (the sequel). I know I’ll get through it – and I know if you’re having the same problem, you will too. Just take each moment as it comes and work through each snag and obstacle. We’ll come out stronger in the end!

It does not matter how slowly you go so long as you do not stop. ~ Andy Warhol.

1 thought on “Second Time Around”