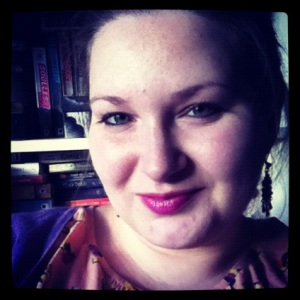 Yesterday, Dan and I got into a discussion about how people judge others so much by their appearance. I was specifically thinking about how reading and participating in the fat-o-sphere has changed my thinking dramatically in recent years. It’s interesting how you begin to reassess and question the status quo when you are exposed to information that tells you just how much our society is invested in eradicating people who look a certain way. Some of it is just ignorance, sure, but sometimes people, the media and governments are so invested in scapegoating particular groups of people, that we begin to see it as a ‘truth’ based on facts.

Let me give you a few examples. For as long as I can remember, I have always been under pressure from other people and social norms to change my appearance. When I was an active child, running around, dancing, playing, I was still a chubby little thing but that didn’t stop me from enjoying food or enjoying the physical limits of my body. I loved to swim – I still do. But for some reason, I would know and watch the women in my family constantly dieting and feeling the pressure to diet, and I would start to wonder whether my own body fell short somehow. After all, despite how active and happy I was, I always felt a strange discordance between what my body could do and the fact that I was chubby. I had chubby knees and a little belly, and though I felt no shame and would dance and run, a creeping awareness began when I came closer to puberty.

It didn’t help that in my last year of primary, I shot up and was one of the tallest in my class (the only time I’ve ever been taller than anyone!). This awareness crept up when I started reading pre-teen and teen magazines – and began to compare my body to the other girls around me. Puberty obviously brings its own challenges, and this made me feel awkward too. I felt that I needed to buy beauty products to look a certain way, to be ‘pretty’, despite my Mum always assuring me that I was beautiful. I would see the people around me dieting and being dissatisfied with their bodies, despite the fact that what a body can do is miraculous and everyone has their own shape and size. I saw myself in the mirror and began to pick on myself, began to think that I needed to diet. Exercise became more of a punishment than a joy.

My body continued to change and grow when I was a teenager. Being an introvert, I preferred to exercise on my own, on my own terms – swimming and dancing and going for walks. Yet obviously the extrovert and social nature of school means that PE is aimed at team building and teamwork. The exercise I loved doing was trampolining, and I did find a new appreciation for tennis and badminton. Yet because I was a big girl, and always felt awkward around my peers, assuming that they saw me as a fat girl, internally I still hated on myself and there were various diets (wherein I lost some weight but inevitably gained it back), which I always hated and made me feel worse about myself – I begun to loathe PE. I often tried to pull a ‘sickie’ because I would dread getting changed in the changing rooms with other girls.

The language of dieting – that we need to punish our bodies into submission, that if you aren’t losing weight it must be your fault and your failing (and not the manufactured and unproven diet ‘regime’), that exercise is something you HAVE to do, and doesn’t count if you’re not losing weight – is all about breaking down your self esteem and getting you to spend more money in the pursuit of the ‘ideal’ body, or the body that you visualise must be hiding underneath somewhere. Weight Watchers has a lifetime membership – and with only a 5% success rate, you do the maths. The diet industry is worth more than the fashion industry.

And what is all this dieting doing to our bodies? In the short term, you lose some weight. In the long term, your body goes into starvation mode and retains the fat that it has. It has nothing to do with somebody not doing the diet ‘hard enough’ or needing to drop more ‘calories’ (a made up thing that makes no sense when you think about the maths), or exercise harder. Our ancestors developed this starvation gene that helped them to survive during times of famine, which explains weight plateau-ing at some point during a diet. In the long term, someone like myself, who has been on various diets through the years, has invariably screwed up her body’s metabolic system. How do I feel? I feel angry that I have spent money and time on stuff that has taken me a few years to get out of my system. For the longest time, I would look in the mirror and hate myself, would grab at parts of my body and hate it. I had internalised the messages around me – that being fat means you’re ugly, that I had to eradicate myself in order to feel happier, that being more means that you’re less.

I’m angry because I was that happy chubby child who loved to run and cycle and swim, and had that joy stolen away bit by bit. When really, society is comprised of a great many different people, fat, thin, curvy, short, tall, of differing abilities. It is nobody’s business what other people eat, or whether they exercise – because health is a personal thing. I know what I love to do, what foods makes my body feel good – but it is different for everyone. I’m not going to go into the whole ‘but OMG! Obesity Epidemic!!!’ thing because its bollocks. Don’t get me started with how ‘fat people are costing us loads of money!’ – thin people cost us loads of money too. There is a scapegoat for every century. If someone wants to educate themselves on the matter – there are loads of new books, research and statistics about health – a lot of it has been hidden and warped by the media, because it doesn’t suit the diet industry (which is funding certain government initiatives) and corporations.

So my point is this – you can’t judge someone’s health, or judge anything else by looking at them. It takes a long time to come out of any sort of judgemental thinking – I know how hard it is to step back and change the way you think, to listen to people. Other people know the experience of living in their bodies, and nobody has any right to take the joy of that away. So I will always be a fat lady, and I’m happy because my body does so many miraculous things every day, and I will always be happy with my body because it is my body and nobody has the right to judge me or you or anyone else because of their size, race, ability or choice of clothing.

… Your body is not a tragedy. It is the only one you get, no matter how much it may challenge, confound, frustrate, or thrill you, and fighting your body isn’t worth the hurt and the divide. ~ Lesley Kinzel.