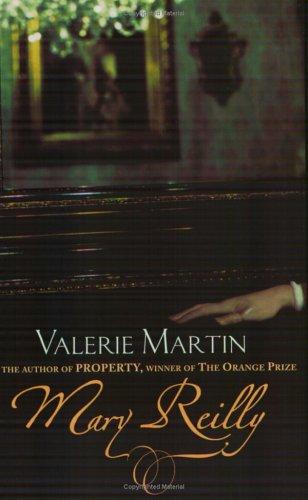 On Monday, I finished reading Mary Reilly by Valerie Martin. Valerie Martin has emerged as one of my favourite authors in the past few years – I’ve read Italian Fever and Trespass, so Mary Reilly was my next choice. This author has a reputation for turning things on their head, for writing disturbing and unsettling twists of fate, for revealing that things are not as they seem. As someone drawn to the gothic and faintly disturbing aspects of literature, it is no wonder that her writing appeals to me!

Mary Reilly is a retelling of The Strange Case of Dr Jekyll and Mr Hyde by Robert Louis Stevenson. Even though I haven’t actually read the book (I’m ashamed), popular culture has generally put it to me that it is all about a Doctor of Science who decides to do some experiments on himself and he unwittingly creates an alter-ego, Mr Hyde. Mary Reilly tells the story from the point of view of one of his loyal household servants. She is trusting, full of courage and enigmatic – I wanted to read her story. It is in the form of her diary entries, so more of a second hand account, but it works well, building suspense and giving extra insight into the matter.

A brilliant aspect of what Martin writes about – a housemaid living in a society where she is meant to not be seen and heard, meant to maintain her lowly status – is that it is also a novel that educates the reader about what life was like for a servant. Mary is an intelligent and smart young woman, raised from poverty, resourceful and curious. Yet she also enjoys her job, takes pride in making her master happy. She has a dark past, full of pain and abuse. Although the novel is a slight love story – she falls in love with her employer, it is by no means a happy love story, which I was expecting anyway. Just in case you don’t know the story of Jekyll and Hyde, I won’t post any spoilers!

What makes the story intriguing is that we get to take a closer look at a character who would otherwise be relegated to the sidelines. Especially, it is interesting to read a story that is from a male point of view changed into a female point of view because the status of women back when Dr Jekyll and Mr Hyde was written was so low. Mary pushes the boundaries of what is acceptable in a society determined by gender and class. The way she creeps about, investigates things; her relationship with her master; her journal writing; her intelligence – she is a character that adds an extra emotional depth to an otherwise traditionally gothic horror.

Valerie Martin has fun with this book, but it is also a touching and sad tale of a woman who overcomes difficult circumstances, despite her social status and the abuse in her past. Her connection with Dr Jekyll, whilst ultimately tragic, changes her and allows her to blossom; in turn, we learn more about a dark and enigmatic Victorian character. It isn’t one of my favourite novels, but I enjoyed reading it and would read it again one day.

It has also been made into a film with Julia Roberts, but I haven’t watched it yet. Its always difficult with adaptations!

‘Then you know who I am,’ he said, very cool and seeming pleased to have been discovered.
‘You are Master’s assistant,’ I said, for I could not bring myself to say his name.
This made him smile and I wished it had not, for there was that in his smile no woman must care to meet, nor man neither, and I felt myself shrink inside my cloak. His cold eyes was all over me as well. He leaned back against the writing table and gestured to the book behind him. ‘I was just taking notes for your master,’ he said, ‘upon a little project we have underway together.’ ” (p.133-4) – Mary Reilly by Valerie Martin