It’s been a while since I last wrote – mainly because I haven’t felt like I had a lot to say, and also because I’ve been lacking in inspiration a bit. Anyway, I passed my MA and got 67% on my dissertation (which is three marks shy of a distinction, so I’ve got a Merit for the dissertation) and will get my official mark in January – so it remains to be seen whether I have a Merit or a Pass. So I’m just happy to have passed at this point because the last year has been seriously hard work but I’m still really glad I decided to do an MA in Women’s Studies. 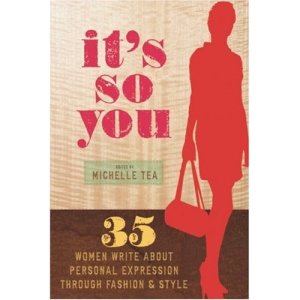 At the moment, I’m reading ‘It’s So You: 35 Women Write About Personal Expression Through Fashion And Style’ edited by Michelle Tea. I know, I know, what has fashion got to do with Feminism, I hear you cry? Some women have a very personal relationship with their clothes, and some don’t. Some are indifferent to what they wear so long as it feels comfortable, whilst others care a great deal about what they are wearing says about them to other people. Others develop their own ‘style’ over the years, whilst others follow fashion religiously. I don’t necessarily think that ‘style’ is being trendy or having the latest clothes. Not everyone can afford to ‘say’ something with their clothes, and some are just don’t have the time. There are a lot of problems with the fashion industry, especially when it comes to women and self esteem, attainability and comfort. Buying clothes is also an ethical minefield, as well as feeding capitalism. But I’m thinking more of the day to day relationship we have with clothes, or the time you wore something and felt amazing, or your favourite outfit of all time. Or your favourite shoes/trainers/boots and so on. You can tell a story beginning with or including a favourite item of clothing or a certain outfit.

The book I’m reading is truly inspiring and shows the struggles, happiness, memories and strong emotions associated with a woman’s choice of clothing. It is a way of talking about the body, about our relationship with our body. In some ways, I feel that talking about clothes can be (not always!) more intimate than talking about our bodies. The very fact that people dismiss fashion, clothes, make up and jewellery as ‘frivolous’ (therefore dismissing women as frivolous) should be cause for concern.

Fashion has been, throughout history, a springboard for revolution – punks, mods, rockers, tattoos, piercings, women wearing trousers for the first time, wearing make up for the first time (it used to be considered something only women working as prostitutes wore), and many other examples. In the UK, the media panics about young people who wear their ‘hoodies’ up, or women who apparently wear “too” little clothing (short skirts and low cut tops).

For me, style is another way to be creative. It is a way to express how I’m feeling, or a way to manipulate my feelings more positively (wearing a bright colour or pattern makes me happier…). I like experimenting with make-up, and finishing off a “look” with some earrings. Each item of clothing has memories – looking through them is like a trip down memory lane. I feel at home in my tattiest pair of jeans, just as I feel at home in my dress with the net underskirt. I think that clothes have an element of escapism, just like a good book has a strong element of escapism. Maybe this is wishful thinking on my part, but I’m someone who really enjoys clothes!

So how can fashion be feminist? It isn’t, at least not the fashion industry itself. But I think women’s relationship with clothing is interesting. We generally have more chances to be creative with clothes than men do – at least at the present time. I also feel that judging other people by their clothes is something to be avoided because there IS more to life than clothes. And I really hate the way those celebrity magazines and women’s magazines encourage women to mock each other’s taste in clothing. This is why I didn’t like Trinny and Susannah because they were needlessly awful to the women on their programme. I also find Gok Wan to be rather annoying – yes he doesn’t make fun of the women on his programme but he still perpetuates the myth that if women aren’t interested in fashion then they are not attractive/feeling good about themselves/making an effort – whatever that means. I’m all for fashion for fun/expressing yourself, but not the kind of fashion that mocks/makes up useless rules/makes you feel bad about yourself.

Anyway ‘It’s So You’ is really worth reading because it is funny and poignant, interesting and inspirational. It has encouraged me to think outside the box where feminism is concerned, and also made me feel like I am not alone in extolling the virtues of polka dots, butterflies and the colour purple 🙂

I also went to reclaim the night in London again this year. I know that there have been posts around saying that it was disheartening in some ways, but then again in others it was exciting. It really does feel good to bring at least part of London to a standstill (or a slow crawl) because 2000 women are marching and demanding an end to violence against women. My Mum, sister and I left the march on the corner of Euston Road, so we didn’t go to the rally afterwards. I was disappointed to learn that there were women shouting outside spearmint rhino AGAIN this year, but equally I am glad that the pro-sex workers group with red umbrellas were there too. Like others have said, I see no reason why spearmint rhino should be targeted on a march to end violence against women, because shouting at it will most likely make the women working in there feel afraid or threatened. When we were all gathered at the beginning of the march, I was actually thinking how cool it was that there were pro-sex worker marchers there with their red umbrellas, because as one of their banners said, sex workers need feminism and feminism needs sex workers. I thought that the march seemed much more diverse this year. Diversity is a good thing, and I wish some people would recognise that.

I also went to a memorial service this evening for my beloved uncle who died one year ago today (26th November 2007). My cousins are understandably still feeling raw pain, and I am very sad for them but glad that we have each other. I feel quite numb about it at the moment because we hadn’t seen him for a long time before he died. He was only just starting to see people again from my aunts side of the family (because he and she had divorced recently and she is my mum’s sister). I only had two uncles and now only one as my Dad is an only child. I guess in many ways, because my sister and I have childhood memories of him, we have good memories to look back on. We miss him very much.