Chickenshed’s spring productions often take inspiration from current and ongoing social, political, and cultural issues to produce thought-provoking and powerful pieces of theatre. Last year, I went to see Blowin’ In The Wind, which used the protest songs of the 60s and 70s to take a look at past and current social protest movements worldwide, incorporating dance, commentary, video projections, and dramatic scenes. I’ve been lucky enough to see productions in Chickenshed’s history, such as Globaleyes, Crime of the Century, and As The Mother Of A Brown Boy that have also had a powerful impact on audiences, educating and emotionally connecting people to issues that we otherwise might be desensitised towards.

Don’t Stop Thinking About Tomorrow is one such performance – this time taking a wide-sweeping and human look at man-made climate change. Most of us know the effect human beings have had on the environment – how industrialisation, waste, use of fossil fuels, and the relentless urge for growth are changing the ecosystem. We often can’t wrap our heads around the statistics and what they mean for us, for future generations, and for people on the other side of the world. With globalisation and the internet, the world has shrunk: there is a sense of urgency that perhaps we didn’t have twenty years ago. Chickenshed’s performance, through song, dance, commentary, and the medium of art, changes your perception of climate change into something that is already changing the way people live – from climate refugees, to droughts in Kenya, to water rationing (currently happening in Cape Town), and the worldwide problem of plastic choking our oceans and rivers. 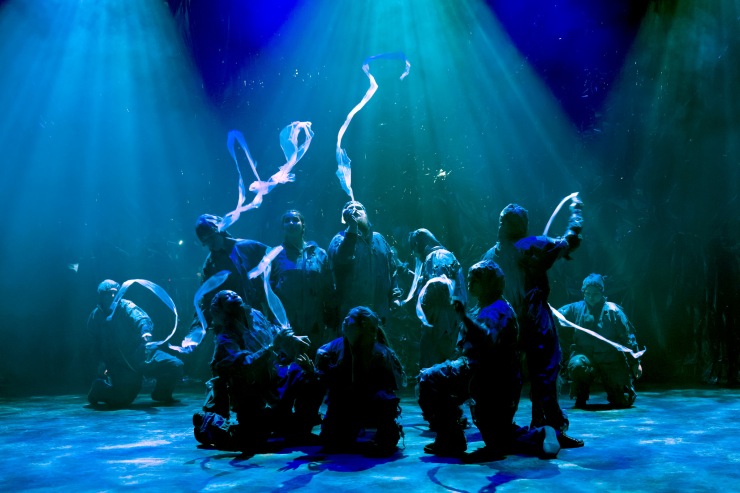 The title is taken from Fleetwood Mac’s song: ‘Don’t stop, thinking about tomorrow, don’t stop, it’ll soon be here, it’ll be, better than before, yesterday’s gone, yesterday’s gone,’ which is a beautiful entreaty to focus on what we can do now for a better tomorrow. The show uses other songs from the 1970s, such as Marvin Gaye’s Mercy, Mercy Me, Hurt by Johnny Cash, Big Yellow Taxi by Joni Mitchell, and When The Day Comes by Nico and Vinz, amongst a handful of other songs, plus original lyrics and music composed for this performance, including a stunning afrobeat song, ‘Hunger’, in a performance piece, Bones of Drought, about a fictional community overcoming the challenges of drought and famine. 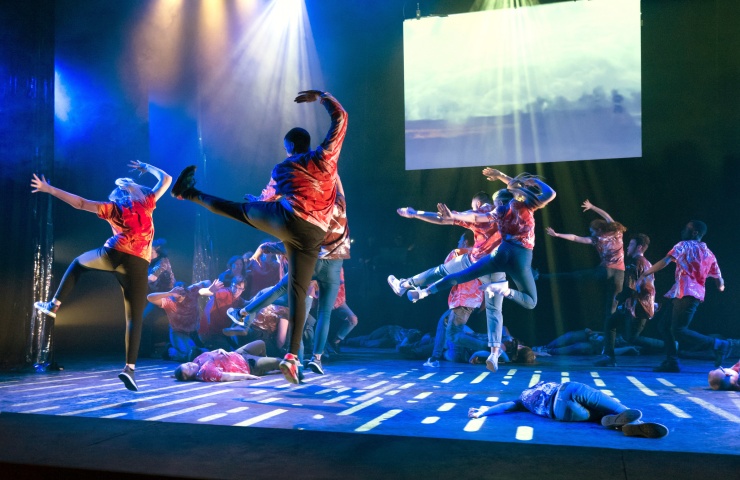 These pieces of performance are pulled together by a narrator, Oscar Buhari, an imagined artist looking at climate change in order to create a piece of art that will engage people with the topic emotionally. The challenge for artists is to engage people with the topic using their hearts, and not solely their minds, which is what we need. For change to happen, we need to understand a topic and how it relates to the people around us (and worldwide), and how it relates to the physical, tangible world, now. It’s easy to feel detached from numbers and figures, and the onslaught of information we receive from the news and scientists. Often, these images and figures are heartbreaking and often what happens with that grief and fear is either apathy (to protect ourselves from overwhelm), or a feeling of impotence, not knowing where to start, or even how to start. This is why art, song, music, fiction, poetry, theatre, and film are such important mediums for exploring these big issues. 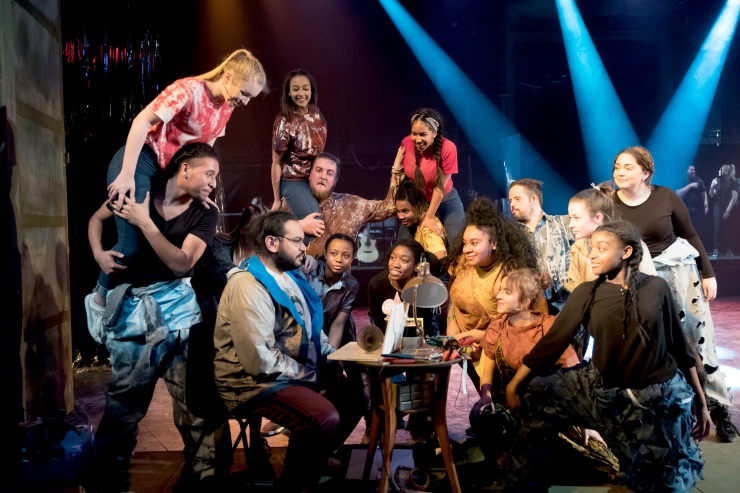 There are six sections in the performance, all looking at different aspects of man-made climate change: Pensive Hope, about melting ice and what we could do to slow the change, Lost Beneath The Waves, focusing on environmental migration and refugees (in 2015, 19.2 million people fled disasters), When Hardy Met Katrina, about the devastating events of 2005 in New Orleans, Plastic Paradise, exploring the effect of plastic waste in our oceans, Beyond Day Zero, looking at the very distinct possibility of water rationing (as soon as 2025 in London, and happening now in South Africa’s Cape Town), and Bones of Drought, exploring drought and famine in Kenya, where, through their own hard work and education, people have learnt to grow and sell their own crops, without help from aid agencies or government, trying to solve the challenges of climate change themselves. 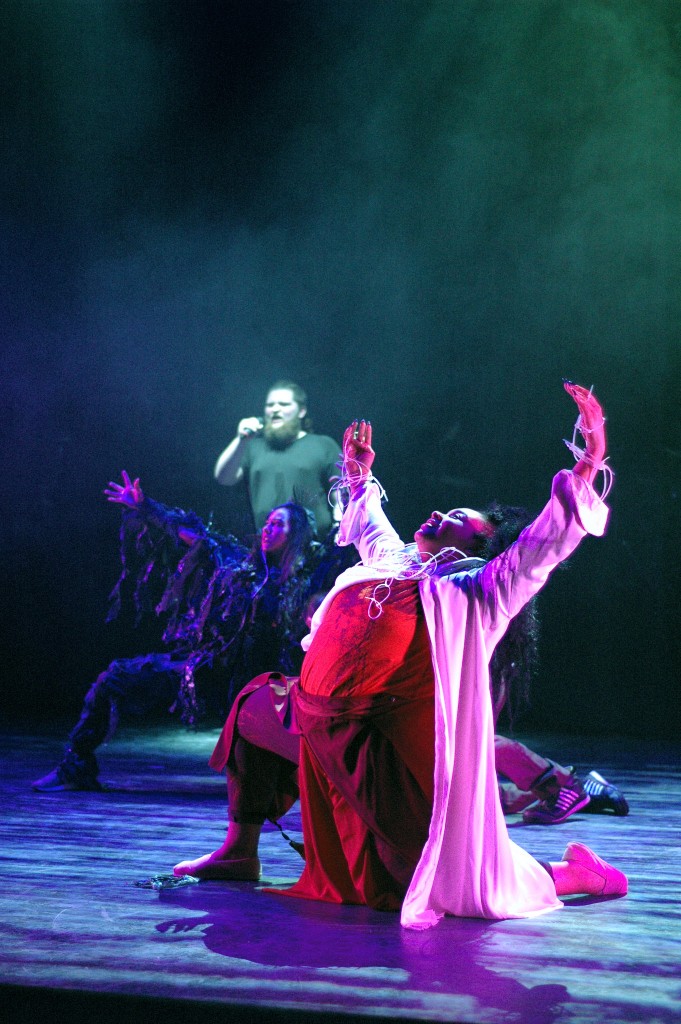 The dancing, as always, was dynamic and full of expression, and the music brought the subject alive. The mix of youth theatre, children’s theatre, and students working together is a signature of Chickenshed’s work, and the inclusive mix of performers is always a joy to see. The set design was simple with standout pieces, such as the large sliding doors that opened and closed to reveal the stage and performers after Oscar’s monologues. His desk and armchair sat outside of the sliding doors, and the effect was not unlike that of an artist’s studio. There was some use of projection, video, and photography to illustrate pieces and to add atmosphere.

Personally, I found myself grieving for the world we had as little as twenty years ago, where it seemed that our planet was abundant with life – even though we were already seeing the effects of drought, famine, and natural disasters. It is always difficult to be confronted the cost of human growth. Animals such as elephants, rhinos, tigers, and lions are already dwindling in numbers, and life is becoming much harder as the growth of human beings means that companies have logged swaths of forest for products such as palm oil (displacing and destroying the habitats of Orang-utans for example),  also having an effect on climate change.

It has never been more important to support companies, initiatives, and products that have pledged to and are actively, fighting climate change, and engaging in sustainable practices. Don’t Stop Thinking About Tomorrow is a non-preachy, imaginative and beautiful performance that leaves you with a feeling of hope and realistic optimism. Change takes working together, and changing the way you live so that you do your part in securing the future of the planet. It was hopeful to see so many young people taking part in this performance reminding me that young people care, and that it is their future we are trying to change.

‘Today,
I will march for me
Today,
You will march for you
We raise our arms and hope for better wins,
We fight a million battles every day,
I don’t wanna see us falling,
So we just gotta keep on running,
Even when the day comes calling,
I’m ready to march…