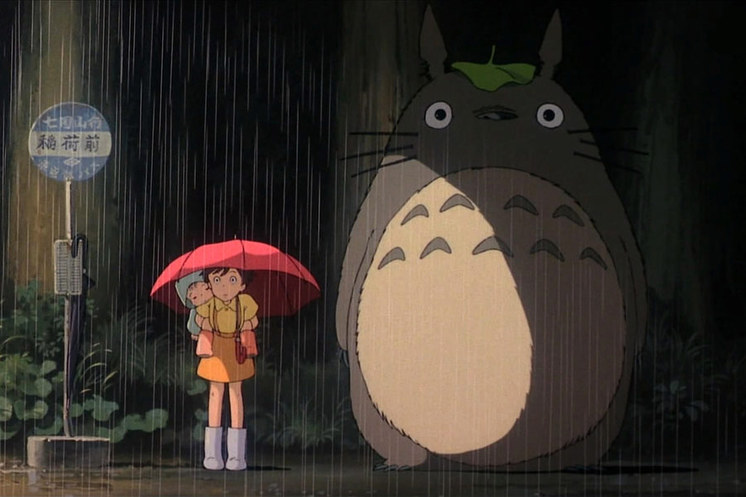 We return to Project Ghibli with My Neighbour Totoro, one of the most popular Japanese anime films in the world. Its popularity may be due to the sense of childlike wonder it brings to both adults and children alike – the film is infused with a joyful celebration of nature and play.

Satsuki, her younger sister Mei, and their father move into a house in the countryside to be near the girls’ mother whilst she recuperates in hospital. To Satsuki and Mei, the house seems large and possibly haunted, with strange little black creatures with big scared eyes leaving dust everywhere, scuttling away from the light, and acorns randomly appearing.

One day, Mei notices a little white creature and decides to follow it. Realising it is being followed, it vanishes – becoming invisible. Mei, however, not to be deterred, notices a larger creature – a small totoro carrying a sack of acorns, dropping a few on its way back into the forest. Both totoro panic and rush into the forest, but Mei, being as curious and stubborn as she is, decides to follow them through a small thicket passage towards the heart of the forest – and the large camphor tree overshadowing everything.

There, she finds the huge Totoro, sleeping on his back and snoring. Mei hops around on his chest asking him questions, and he slowly wakes as he realises she is there. Eventually, they both fall asleep again. Later, she manages to persuade her sister Satsuki that Totoro and his little friends do indeed exist, and both of them pay their respects to the camphor tree and shrine in the forest. Satsuki and Mei both see all the forest spirits perching on a large branch in the middle of the night with Totoro himself playing on an ocarina, which further convinces Satsuki. They go on to have a number of adventures with the forest spirits, the Catbus, and Totoro. 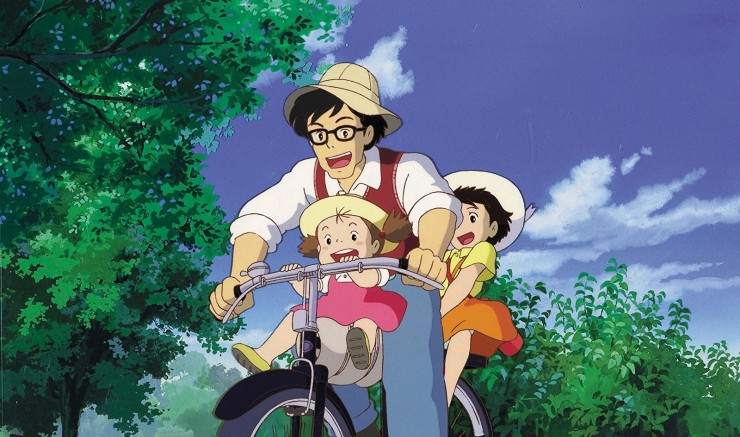 It seems incredible now, but My Neighbour Totoro had difficulties finding financial backers, and it was only with its release as a double feature with Grave of the Fireflies that backers agreed to finance it. It was considered to be childish at the time, a film for young children. Studio Ghibli wasn’t yet self sufficient and needed investors to continue making their films. Putting the two films together as a double feature also seems strange – Grave of the Fireflies is a beautiful, harrowing film about the struggle to survive in a time of war, whilst My Neighbour Totoro is also a stunning film, but about living in harmony with nature and the happiness to be found within childhood. Thematically, almost complete opposites. Yet, they both went on to become critically acclaimed and loved the world over.

My Neighbour Totoro doesn’t shy away from some of the difficulties of childhood. The illness of Mei and Satsuki’s mother means that there is a level of uncertainty to their lives, and a number of times Mei becomes overwrought, unable to process the sadness the family are going through. There is plenty of tension within the film too – at one point Mei goes missing, in order to try and visit the hospital, and Satsuki is desperate to find her. Their father is often home late, commuting or visiting their mother, and in those difficult moments Totoro infuses a sense of wonder into their sadness, often saving the day. They develop relationships with the woman who is renting the house to them, Granny, and her grandson Tanta, and Satsuki seems to settle in at school with a number of friendships. The characters are believable and human, not straying into overly sentimental portrayals.

The film shows Miyazaki’s preoccupation with the natural world to beautiful effect, with stunning scenery, a palette of muted yet striking colours. The forest spirits appear to be part of the natural habitat, and not separate from it. They are less ‘supernatural’ and more folklore-ish, more akin to animals of the forest as opposed to something arising simply from the imagination. Totoro may seem cuddly and gentle, but his bellow, teeth, and claws hint that he may be a formidable opponent, not a creature you’d want to offend. Nature has teeth and claws, and the film does emphasise the possibility of danger. Totoro appears to be visible to Satsuki and Mei because they respect the natural order of the habitat, and because they understand the importance of nature. In this way, Miyazaki is giving a gentle lesson in how to respect the environment and find joy within it. 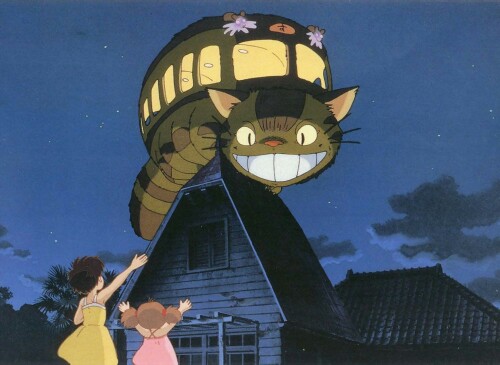 Every time I watch My Neighbour Totoro, I come away full of joy and delight, and somehow happier and more hopeful. In this way, Totoro seems to be less of an exercise in nostalgia, but rather a film that connects us – child and adult alike – with a sense of wonder at how beautiful the world and planet are. It shows us how to play and laugh, if you’ve forgotten. It’s a timeless film that should be watched when you need an infusion of sheer happiness.

‘I do want to state clearly that I didn’t make this film out of personal nostalgia for that time. I made it hoping that children would see it and then go out to run around the fields or pick up acorns. Or, though we only have a few such spaces left, that they would play in the thickets behind shrines, or become excited while peeking in the crawl spaces under their houses. That’s why I made this film.’ – Hayao Miyazaki.