‘Shakespeare and Company is a winding, twisting, climbing labyrinth of books, a literary commune, a shelter for writers, a refuge for book lovers. It is–as my father, George Whitman, said–“a novel in three words.” – Sylvia Whitman.

At Kilometer Zero in Paris, the road at which all roads in France begin, is a façade recognised the world over to bibliophiles and aspiring writers. In a little square with forest green railings, two little trees and a string of multicoloured lights swooping across, George Whitman’s ode to books and writers filled me with joy. I haven’t felt this excited about a bookshop since I first stepped into Foyles (which is a Mecca of books, whilst Shakespeare and Co is a maze of books). If there was ever a spiritual home for book lovers – this is it. 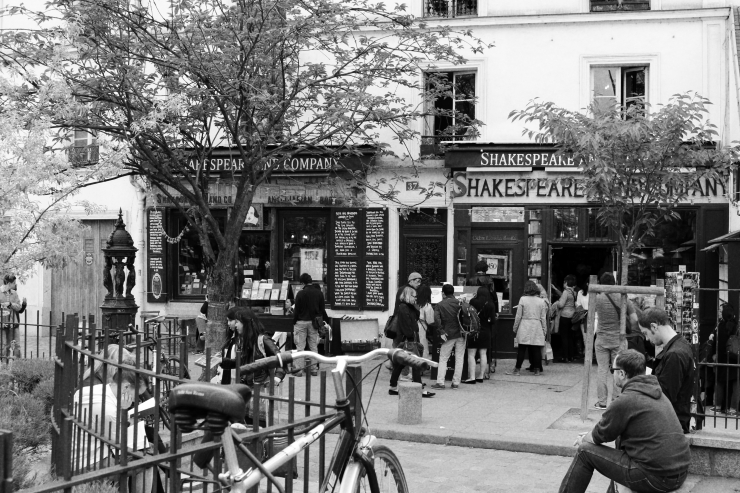 On first stepping into the bookshop, my eyes were drawn towards the vertiginous stacks of books, with little wooden ladders leaning against them here and there. I stopped at the non-fiction section at the front of the shop to begin with, looking at the zines. During the day, the shop wasn’t mobbed, but there were a lot of people. At the front of the shop, there’s a sign urging you not to take photos inside in respect to readers and browsers. I took some of the outside, but didn’t feel comfortable taking photos inside – unlike some other people! It was very tempting to take photos, but there are many of them floating around Tumblr, and we bought a booklet with the story of the bookshop that has wonderful images in it anyway. 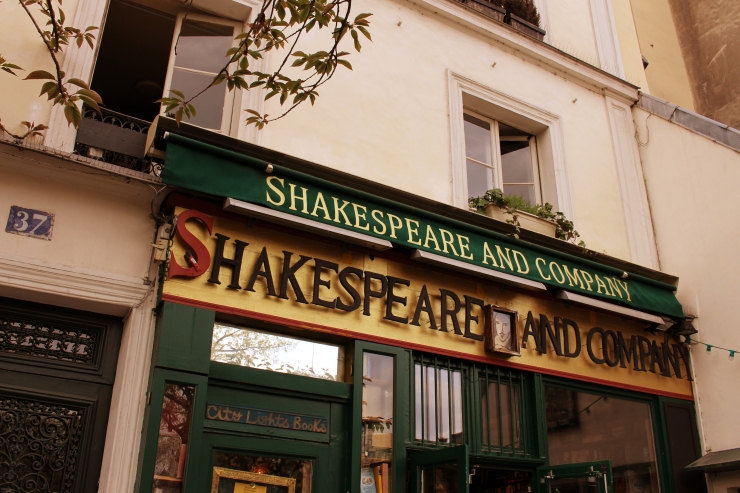 What books caught my eye that day? I was drawn to Siri Hustvedt’s Blazing World, and took a few moments to browse the Science Fiction and Fantasy section at the back of the shop. It’s the same in my local Waterstones – Sci Fi and Fantasy is in a little nook at the back. I found the stacks and piles of books overwhelming – I wanted days to browse and explore. As we made our way around the shop, Dan found some little notes tacked to the back of the stairs – two lists of advice from writers. When I made my way upstairs, I popped into the reading rooms – and there must have been at least four typewriters that I noticed. There was a little cubicle with a chair and typewriter, the wall covered in notes from visitors and aspiring writers.

Upstairs, along with the children’s book section, are two reading rooms full of old tomes, benches and a piano. This is where George Whitman used to hold his Sunday afternoon readings and tea parties, and where writers were urged to stay the night, and often staying for weeks, becoming ‘writers in residence’. He called these writers Tumbleweeds, aspiring writers who helped in the shop for an hour a day, read one book a day and wrote a page of autobiography about themselves – his conditions for their stay. The benches in the reading rooms can convert into makeshift beds. There is an energy in the walls – the energy of the past and the present, where I felt I was intruding on the readers deep into their books.

Downstairs again, I picked up a book that caught my eye – The Bone Season by Samantha Shannon – and browsed again. I eventually decided to go with Colette’s France: Her Lives, Her Loves – a beautiful hardback book which was, at least, related to Paris. I could have spent hours browsing, but the cat café called (yes, we went to Paris’ new Le Café des Chats). As we paid, the lovely lady behind the counter gave us a limited edition bag for free – the façade on it printed in purple. Each of the books was also stamped with the Shakespeare and Company logo inside. 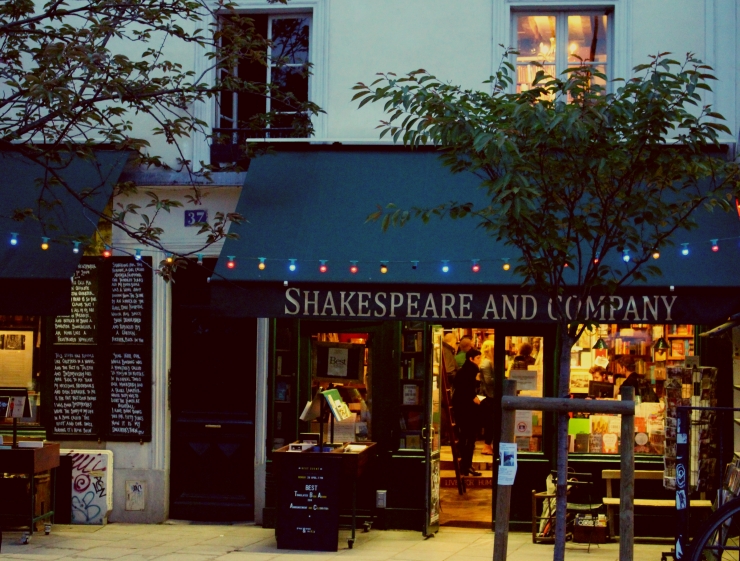 We returned again on our last day, in the evening. Most days, the shop is open until 11pm, and around these later hours, there are less people browsing and more of an opportunity to take your time without being jostled. The square was also lit with those multicoloured lights, and the chandelier inside was a welcoming warm glow. We noticed more about the shop this time – there was a well under our feet with the sign – ‘feed the starving writers’ – and Dan couldn’t resist putting a few euros in. 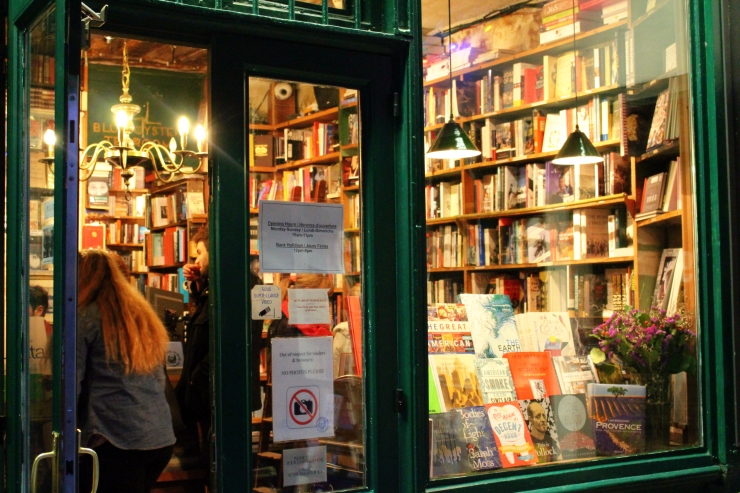 I had forgotten the title and author of the book I had been interested in on the first visit (Siri Hustvedt) – and it wasn’t where I remembered it being so it turned into a little bit of a detective hunt. Eventually I found it again and made a note of it for back in the UK. This time, I decided to buy an Agatha Christie novel (Poirot) – my first Agatha Christie! –  and Patrick Suskind’s Perfume (this is my cousins favourite book and so I decided it was time I read it). Perhaps it was the night turning me towards darker things. Dan bought three graphic novels, amongst them Persepolis and Persepolis 2 by Marjane Satrapi (the film is wonderful too).

What else is there to say? If I had a bookshop, it would be like this. Our room is already a bit like this – with piles of books around the walls. It has a pioneering spirit, the spirit of the books that call to you from the shelves. It is George Whitman’s novel:

‘I created this bookstore like a man would write a novel, building each room like a chapter, and I like people to open the door the way they would open a book, a book that leads into a magic world in their imaginations.’ – George Whitman.